Perforated underlays for laminate flooring – and why you should avoid it

Even if you have already chosen your laminate or vinyl floor panels, you still have another choice that will define your satisfaction with your new flooring and what if you will use floor heating underlay?

The underlay forms part of the flooring structure, and concealed under the panels it might seem to be a minor issue. This would be one huge mistake. The underlay is what protects the floor panels. Thanks to its optimum rigidity and stiffness, it protects the flooring against micro-cracks. A more down-to-earth analogy is that the underlay for your floor is like a protective case for your phone. Without an underlay, the components of our flooring that are sensitive to damage, like the joints, may quickly degrade. Manufacturers are increasingly offering underlays with perforations. Would you want a phone case with holes in it? Read on to discover just how absurd and ineffective a perforated underlay is.

There are several underlay versions available, varying by perforation type, with round, square and rhomboid holes. These underlays are advertised as safe and professional solutions, and seemingly perfect for underfloor heating systems. Most of them are made from XPS (extruded polystyrene), which in itself is not a bad material. Unfortunately, an underlay with holes has one essential drawback – it cannot form a stable, continuous layer. This means it fails to protect floor panels from damage, especially the fragile joints between them.

The perforated underlay manufacturers have given no sound reasons for the holes in these products. They also fail to specify the thermal resistance coefficient for these underlays, which we need in order to know how effective the underlay is for underfloor heating. The perforations in the underlay seem to be just a great way for the manufacturers to save on materials without offering any real value for the customers.

The holes formed in the underlay can lead to several unfortunate consequences.

Perforated material is uneven, causing several problems. In first place the product varies in properties across its surface. Sometimes it might be an XPS underlay with a good R coefficient, while other times it forms an insulator in the places where the holes are because the air that accumulates in them has a low density and cannot circulate freely. Air also has thermal resistance, which we need to remember in finishing and fitting out the house.

Laminated floor panels are loud upon impact. Adding an underlay with large penetrations creates a soundbox, amplifying every impact on the floor. If you have ever knocked on a partition wall made of hollow bricks, then you know how well the voids inside help the sound propagate better.

Third, and we are coming to the very reason we began this problem analysis. An underlay is intended to protect the floor panels. What happens when we use a perforated underlay under the panels? Those parts where the underlay has holes increases the leverage from the loads that are applied to the panels, and hence the risk of cracking the floor, especially at the joints. The instability of the material is a serious flaw of perforated underlays.

Thermal resistance, or which underlay to choose?

The overall thermal resistance depends not only on the thickness of the material, but also on the presence of ventilation. Certainly, an XPS underlay with perforations in it has a higher thermal resistance than a solid XPS layer.

The benefits of underfloor heating

The popularity of underfloor heating systems is growing because of their many advantages. First, underfloor heating provides a uniform temperature distribution across a heated room. There is no issue with colder and warmer room areas. The emission of heat from underfloor heating is pleasant and definitely favoured by anyone who hates the cold.

Which underlay for heating is best?

If you want to go with laminated engineered wood panels, the underlay you use is critical to the underfloor heating performance. The best commercially available underlays for heated flooring are made of PUM (polyurethane mineral) materials. They provide the lowest possible thermal resistance and extreme durability (by high compressive strength, or CS), which means excellent protection of the floor panels against damage under load. 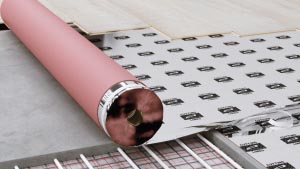 High quality, of course, means high price. A good PUM underlay like Multiprotec 1000 costs approximately 5,5 EUR/ 1 m2. Is this expensive? Not if you think logically about it. For a little over 5 EUR you get a product which guarantees your floor panels are kept in great shape for many years and cuts down the costs of space heating.

Another good solution is XPS underlay. XPS is a popular high-performance underlay material, it is up to 2 mm thick and works well with underfloor heating. However, an XPS underlay sheet must be solid to form a stable, uniform layer to stabilise the flooring. A good example is Secura Thermo Aquastop Smart.

To conclude, say no to perforated underlays. If you like cut-out patterns, get a tablecloth or a doily.